Design Minds developed a new brand identity for Joe Duffy Group and Joe Duffy Select. The new identity and roll-out was applied to all their print, digital communications, livery, advertising and signage.

In 1972 Joe Duffy was appointed the first solo BMW Dealership in Ireland, the company, which was founded by Joe Duffy and Bill Thompson opened its doors with only four members of staff. That year 180 BMW’s were sold in the 26 counties of Ireland, of which 90 were sold by Joe Duffy! 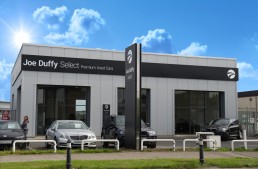 “We engaged with Design Minds to undertake a complete re-design of our Group logo and associated branding to give it a more premium feel and to associate our business with strength, security and reliability.
I was delighted with the professionalism and time taking by Diarmuid and the team to get an understanding of our business and brand and the finished logo and accompanying brand guidelines documents.
I would recommend the team at Design Minds to anyone considering changing their branding as the team goes far beyond a simple change of logo and instead provides a more comprehensive branding service to customers.”

Request a Quote for Your Project